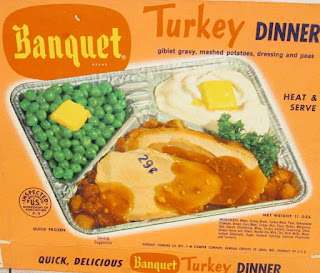 In the mid sixties we were not rich. My mom prepared dinners from scratch like liver and onions, tuna caserole and something called hungarian goulash. The tuna caserole was okay but the other stuff was not for me. I was skinny as it was but.

Someone invented the TV dinner. And then someone else (I presume) invented or discovered fish sticks. Life was good after that and liver and tongue free.

My Oscar acceptance speach will include thanking TV Dinners.

Having said that:
TV trays origins can be traced back hundreds of years which is pretty remarkable considering TV wasn't invented until 1927.

Getting back to our purpose. TV dinners, now called frozen dinners can be a cheap guys' staple. If you can get a meal: meatloaf and mashed potatoes, Salibury steak and mac and cheese or spaghetti and meatballs for $3.00 life is good,